Rat adjuvant arthritis (AIA) is an experimental model of polyarthritis that has been widely used for preclinical testing of numerous anti-arthritic agents, which are either under preclinical or clinical investigation, or are currently used as therapeutics in this disease2-4. The lesions in adjuvant arthritis are somewhat less analogous to those seen in human RA than are the lesions of type II collagen arthritis in that there is less extensive pannus associated cartilage destruction. However, adjuvant arthritis has been used much more extensively for pharmaceutical testing and therefore more data exists for comparison in humans.

The hallmarks of this model are reliable onset and progression of robust, easily measureable, polyarticular inflammation, marked bone resorption and periosteal bone proliferation. Cartilage destruction occurs but is disproportionally mild in comparison to the inflammation and bone destruction that occurs. Clinical evidence of arthritis occurs on day 9 or 10 after injection of adjuvant.

Additionally, splenomegaly occurs as a result of profound induction of extramedullary hematopoiesis in the red pulp in conjunction with pyogranulomatous inflammation in the red pulp and capsule. These changes are usually in association with mild to marked lymphoid atrophy. Ideally, an agent active in adjuvant disease should restore the spleen weights and morphology to normal as is the case with methotrexate treatment. Hepatomegaly also occurs as a result of hypertrophy of hepatocytes and should be beneficially affected by treatment. Also fairly consistently present in these animals is an anterior uveitis which may be histologically evaluated for treatment effects.

To assess disease progression, caliper measurements of ankle joint width or volume using a water displacement device are done prior to the onset of arthritis, and then every other day until the study is terminated. At termination, the tibiotarsal joint is transected at the level of the medial and lateral malleolus for determination of paw weights as another measure of inflammation or its inhibition.

Ankles are given scores of 0 to 7 for inflammation, cartilage damage, pannus formation, and bone resorption according to these methods.

Also, spleens are given scores of 0 to 5 for splenic inflammation, lymphoid atrophy, and extramedullary hematopoiesis according to these methods. 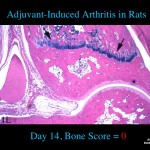 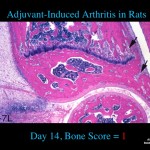 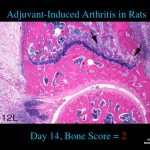 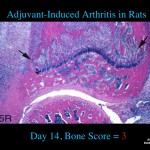 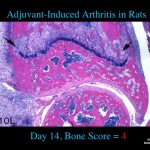 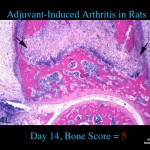 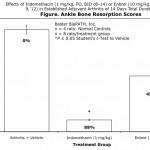 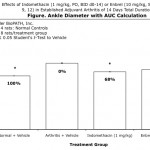 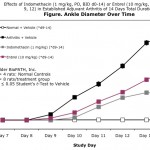 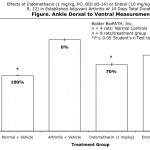 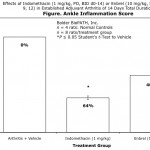 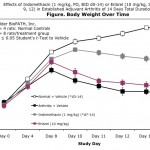 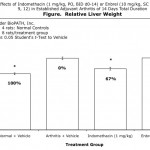 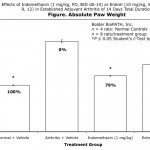 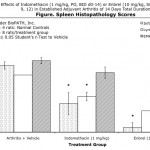 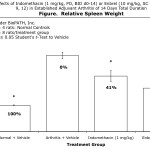 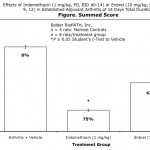 Various stress-related factors including manipulations during the test period (pharmacokinetic sampling), frequency of dosing (QD vs BID) or type of vehicle used can influence the disease progression.

Clinically used agents that are active in adjuvant arthritis include corticosteroids and nonsteroidal anti-inflammatory drugs (NSAIDs) such as indomethacin and low dose methotrexate. Interleukin-1 receptor antagonist (IL-1ra) and soluble TNF receptors also have activity in this model9-12. Inhibition of IL-1 in the adjuvant model dramatically inhibits the bone resorption that is a prominent feature of this disease but has little effect on the inflammation. Combination therapies, a likely clinical scenario, in this model using IL-1ra and methotrexate have shown the potential for additive effects10. Combinations may allow the reduction in dose of more toxic agents such as methotrexate while achieving superior efficacy than could be achieved with either agent alone.

The soluble TNF receptors have also been evaluated for efficacy in this model. A pegylated version of the type I receptor (PEG sTNF-RI) is active against both inflammation and bone resorption11 and shows additive benefit when used in combination with traditional agents like methotrexate13 and dexamethasone12 as well as in combination with IL-1ra14.

For more information about Adjuvant Arthritis contact us here.