There are numerous murine models that have long been employed in an effort to understand the cellular and genetic requirements for SLE induction. The classic models of spontaneous lupus include the F1 hybrid between the New Zealand Black (NZB) and New Zealand White (NZW) mouse strains (NZB/W F1) and its derivatives, the MRL/lpr (fas signaling deficient), and BXSB/Yaa (primarily a duplicated gene called toll-like receptor 7 (Tlr7) that is responsible for autoimmunity phenotype) strains. All of these models portray their own iterations of lupus-like diseases with a subset of symptoms akin to those observed in human SLE, namely, autoantibody production (antibodies to double stranded DNA (dsDNA), lymphoid activation, hyperplasia, elevated proteinuria (excess protein in the urine which is a sign of kidney damage), and lupus nephritis (Moser, 2009; Kono, 2006, Theofilopoulos, 1985; Rudofsky, 1993; Morel, 1994; Canadian Council on Animal Care, 1998). All these strains reliably develop spontaneous lupus Nephritis. The objective of the sheep anti-rat GBM antibody-induced gomerulonephritis model is to identify compounds/proteins for potential clinical trials that inhibit murine SLE or lupus-like nephritis in normal inbred mice in which a lupus-like condition relevant to human disease is induced. Models based on manipulations of normal inbred mice add to our ability to model various subpopulations of human patients that are not sufficiently represented by the existing spontaneous models.

In a typical study, 129X1SvJ female mice will arrive at 8-10 weeks old.  One to two weeks later (day -6), all mice are weighed, randomized by weight and evaluated for proteinuria.  On day -5, they are all then sensitized to sheep IgG by IP injection of 75 ug sheep IgG in 0.05 ml of a 50-50 IgG/PBS-CFA mixture at 1.5 mg/ml IgG.  On days -4 and -1 the mice are again weighed and evaluated for proteinuria, prior to disease induction on day 0.

On day 0, all groups will be injected IV with 20-30 uL of sheep serums in 70-80 uL of PBS.  One group of non-disease control animals will be dosed with 40 uL of normal sheep serum. The remaining groups of animals will be diseased, induced with 20-30 uL of anti-GBM serum (in 70-80 µl of PBS).  These groups will be composed of at least one vehicle control group, one positive treatment control group (Dexamethasone or cyclophosphamide) and a number of drug treatment groups.  Treatment will start on day -1, day 0, or day +1, depending on whether prophylactic, developing or therapeutic dosing is desired. 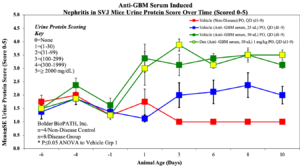 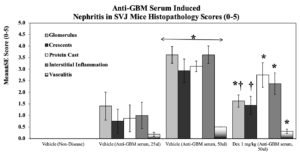 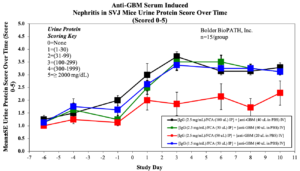 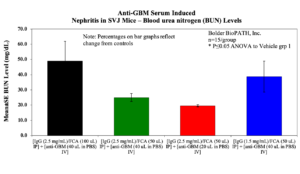 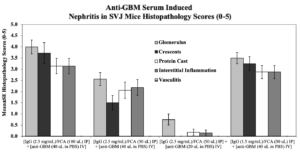 Guide for the Care and Use of Laboratory Animals (8th Edition). National Research Council, National Academy of Sciences, Washington, DC, 2011.