Systemic sclerosis (SSc) is an autoimmune connective tissue disorder that is varied in its clinical manifestations but is characterized by circulating autoantibodies, vasculopathy, and fibrosis of the skin, lung, kidney, and GI tract1-6. Due to the accumulation of collagen, skin symptoms and stiffness may cause severe disability, while cardiovascular and pulmonary complication lead to high mortality1,2,7. Despite recent progress and numerous efforts to understand the underlying mechanisms of the disease, therapies are limited.

The lack of an established therapy for SSc is hindered by the lack of animal models that fully recapitulate the complex nature of this disease7,8. Although no animal model currently reproduces all the manifestations of SSc, the bleomycin-induced scleroderma model is the most widely used and well characterized. Because of its abilities to cleave DNA, bleomycin (BLM) is an anti-tumor antibiotic used in various cancers, which was originally isolated from the fungus Streptomyces virticullus5,8. While the exact mechanism of BLM-induced SSc is not yet fully elucidated, it is hypothesized that BLM causes dermal injury which activates inflammatory cells such as macrophages, T-cells, neutrophils, eosinophils, and mast cells which leads to apoptosis, reactive oxygen species (ROS), and a cytokine and chemokine cascade leading to fibroblasts and endothelial cells increasing production of the extracellular matrix (ECM), ultimately resulting in scleroderma2,3,5,7,9,10. The bleomycin-induced model reflects many of the symptoms seen in patients, particularly circulating autoantibodies and fibrosis of the skin and lung1-10.

On study day -1 animals will be anesthetized and the hair on the back will be depilated. Mice may be re-shaved as necessary to keep the back free of hair.

Animals may be necropsied up to two weeks after the final dose of bleomycin.

-ELISA and/or Luminex analysis of serum, skin, and lung homogenate

The skin thickness (dermal-epidermal junction to subcutaneous fat) was measured at 5 sites starting at the left side of each section and progressing to the right side at approximately equal µm intervals.  If 2 sections of skin were present, a total of 10 sites were measured.

Lung samples are processed and embedded whole, sectioned and stained with H&E and Masson’s Trichrome for pathology evaluation and scoring of fibrosis using the modified Ashcroft Scale.

Lungs were scored for the percentage of interstitial fibrosis, as follows:

Evaluation performed using the 20x objective, with scoring of the most severely affected area as follows:

Individual scores for percentage of interstitial fibrosis (0-5) and modified Ashcroft scale (0-8) were added to determine the total lung score for each sample.
Sample Data: 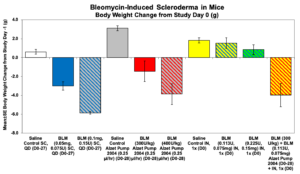 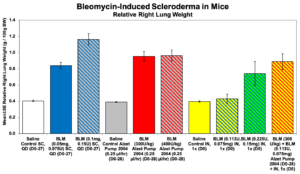