Experimental autoimmune encephalomyelitis (EAE) is a demyelinating central nervous system (CNS) disease that is commonly used as a model of Multiple Sclerosis (MS) since they share clinical and pathological features1-5,8-9,14,16-17. While the exact etiology of MS is unknown, rodent models have allowed for the better understanding of the inflammatory process over the course of the disease, from which many of the drugs that are currently in use in MS, such as glatiramer aceteate and natalizumab, have been developed or tested in EAE studies1-2, 6-10, 12, 15. This model allows for the development and preclinical testing of a wide range of potential therapeutic interventions as well as insight into immunopathogenic mechanisms of MS2,4,6-10,14.

On day 0 of the study, mice will be anesthetized with 3% isoflurane and immunized with 200mg of MOG(35-55) in 100mL of complete Freund’s adjuvant (CFA) containing 4mg/ml of inactivated M. tuberculosis, in two subcutaneous injection sites on the back. One to two hours post the subcutaneous injections, the mice will receive 100mL of 500ng pertussis toxin (PTX) IP. A second injection of PTX will be administered IP 24 hours after the first injection.

Animals will be clinical scored (see below) daily or every other day beginning on day 7 and weighed a minimum of 3 times per week for the duration of the study. Typically, 90-100% of mice begin showing signs of ataxia and paralysis by day 9-14 with maximum severity (full hind limb paralysis) occurring approximately three weeks after immunization, after which time clinical symptoms recede without returning to baseline. Studies will last no longer than 28 days.

Spinal cords from all surviving animals are examined microscopically by a board-certified veterinary pathologist.

Serial cervical, thoracic & lumbar sections will be stained by H&E for inflammatory infiltrate and luxol fast blue for demyelination. Foci of inflammatory cell infiltrate (sufficient size to be clearly recognizable as discreet foci-generally at least 50 µm in width) were counted and any small diffuse foci were assigned a value of 0.5. Any areas greater than 100 µm in width/length were divided and counted as multiple areas (example-a 100 X 500 µm lesion = 5 foci). Linear foci in meninges (usually 10-40 µm thick/various lengths) were counted in increments of 200 µm. These numbers were used to determine and inflammation score using the following criteria. Scores (based on counts) may be adjusted to reflect the severity of the disease present in controls.

0.5=very minimal, 1 or minimal diffuse (no distinct aggregates) in an area

2=mild, 5-7 small discreet foci, may have some minimal diffuse areas

Percent area of white matter that had demyelination, edema, dilated axons was estimated and used to determine a score using the following criteria 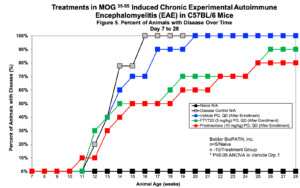 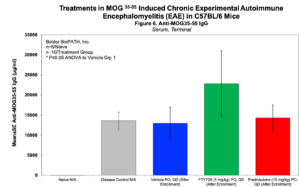 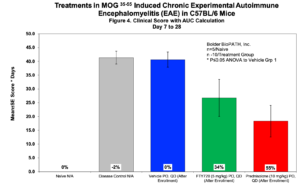 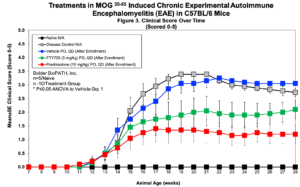 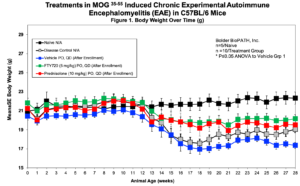