Systemic autoimmunity, lymphadenopathy associated with proliferation of aberrant T cells, immune complex glomerulonephritis and arthritis start at approximately 10-12 weeks of age. The disease significantly affects both female and male MRL/Mp-Faslpr mice; female mice die at an average age of 17 weeks of age and males at 22 weeks1, 7.

5 = Large at two bilateral sites and small at one.

6 = Large at all three bilateral sites.

Kidneys from all surviving animals are examined microscopically by a board certified veterinary pathologist (Dr. Alison Bendele) and scored for: glomerular diameters and crescents, tubular protein casts, interstitial inflammation, and vasculitis, according to these methods. 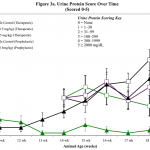 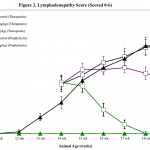 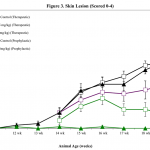 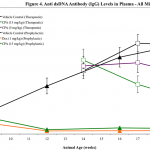 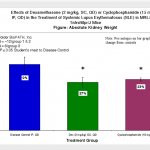 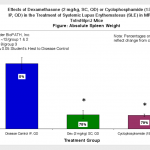 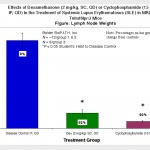 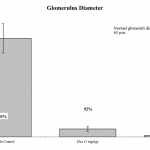 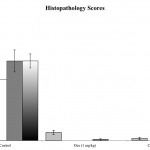 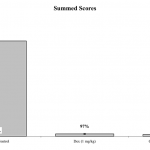 In addition to multiple underlying genetic factors contributing to the pathogenesis of SLE in MRL/lpr mice, a single genetic mutation that leads to aberrant Fas transcription accelerates the disease’s progression. As in human lupus, SLE in MRL/lpr mice is biased in favor of females, although it significantly affects males as well1. Clinical manifestations of SLE in this model include hyperactive B and T cells, high titers of several autoantibodies including antineutrophil antibodies (ANA) and anti-dsDNA antibodies2, defective clearance of immune complexes, and fatal renal disease (glomerulonephritis, interstitial nephritis, vasculitis, and proteinuria). MRL/lpr mice differ from other strains in that they have the highest titers and largest array of auto-antibody specificities, and they develop antibodies against the nuclear components Smith (Sm) and ribonucleoprotein (RNP). A proportion of MRL/lpr mice also develop skin rash, inflammatory arthritis, and immunoglobulin (Ig) M rheumatoid factors. Lymphoid hyperplasia, which is not a feature of human SLE, is exhibited by MRL/lpr mice and this can confound histopathology3. The speed of the disease in the MRL/lpr strain is sufficiently rapid to be efficient in testing new therapies and sufficiently slow to dissect the pathogenesis of the disease4–6.