Nitroglycerin-Induced Migraine in Mice and Rats

Migraine is the third most common medical condition worldwide4,6,7,11,12. Migraine is a multifactorial primary headache disorder characterized by recurrent headaches that are moderate to severe, lasting from a few hours to days1,2,5,10,12.  The understanding of migraine pathophysiology has evolved from the belief that migraine is a vascular disorder, to evidence that better defines migraine as a neurogenic disorder associated with secondary changes in brain perfusion. There is evidence to suggest that the early phase of migraine pain results from neurogenic inflammation affecting cranial blood vessels and dura13. Migraines are typically unilateral and pulsating; associated symptoms may also include nausea, vomiting, sensitivity to light, sound, or smell1,2,4,5,12.  The underlying pathophysiology of the disorder remains unclear, although substantial evidence supports an important role of nitric oxide as a pivotal mediator contributing to the pathogenesis of migraine1- 6,11,12. Systemic administration of nitroglycerin (NTG), a nitric oxide donor, provokes spontaneous-like migraine attacks in migraine sufferers and similar symptoms in rodents3-12.

Triptans are the acute treatment of choice, but reports vary with 40% to 75% of patients seeing relief with these treatments1,8,9. Therapeutic strategies are limited and less than half of patients are satisfied with their treatments7,8,9. Furthermore, the development of novel migraine therapies has been slow due somewhat to the small number of predictive animal models7,9. There is a huge unmet need for patients with migraine, as such animal models are essential for studying the pathophysiology of headache disorders and as a screening tool for novel therapies.

Animals will be acclimated to behavioral procedures prior to study initiation. Animals may have behavioral baselines taken prior to disease induction. For acute studies animals will be dosed once with 10mg/kg nitroglycerin IP (both mice and rats) and up to 5 times every other day for chronic studies. Animals may be tested before and after each NTG administration, and kept no longer than 2 weeks after the final NTG dose since sensitivity continues after NTG is withdrawn (von Frey could continue every other day during this time period).

Body weights will be monitored for the duration of the study and von Frey testing will be performed to monitor pain.

Rats/mice will be habituated to animal colony for one week and handled four times for five minutes each after week of habituation. Animals are habituated to the testing rack or restraining tube three times during this process.

A von Frey (VF) testing kit for our purposes consists of a set of hairs that range from 3.16 to 5.18 absolute threshold. Each researcher should use the same set of hairs since there may be some variability between kits.

The purpose of testing is to determine which stiffness hair the rat will respond to 100% of the time. Data is entered into a spreadsheet and a separate program (psychofit) is used to translate this 100% response rate into a 50% threshold, which is used in reporting results.

Testing begins with three applications of the 4.31 hair.

Responses are recorded on a template as either a 0 (no response) or a 1 (response).  Often times the animal will response once or twice to a certain hair and then not a third time. This is recorded as a 110 or 101 on the template.

When testing, place the hair on the surface of the hind paw and push smoothly until the hair has a significant bend in it.  Keep the hair as steady as possible since wiggling will increase the likely hood of getting a response.  Keep hair pressed against the paw for eight seconds of left paw, and then right paw for eight seconds.

Testing is done on the hind portions of the hind paw – the heel tends to give a more reliable and sensitive response.

A response is recorded when the rat has an obvious reaction to the pressure of the hair.  Usually this manifests itself as a lifting of the hind paw from the grate to relieve the pressure. Sometimes responses are very obvious, sometimes more subtle.  Some animals will jerk their leg away and quiver, while others will respond by walking away from the offending hair.

Periorbital testing is performed in an acrylic tube restrainer (like that for IV dosing). The von Frey filament is applied just above the eye, just rostral to the whiskers. Care should be taken to not touch the whiskers. A positive response is considered present when the animal vigorously strokes the face with the ipsilateral forepaw, a quick recoil of the head away from the stimulus, vocalization, or attempting to attack the filament.

Tester should be aware of hyper-responding.  Rats/mice quickly learn that something is annoying them and may put undue attention on their paws.  This may result in over responding to a stimulus that they would not normally respond to. Freezing is also a large concern during testing, because if the animal becomes too agitated or frightened, they may be feeling the hair, but not responding because of their freezing instinct. If this occurs, leave rat/mouse alone, or distract them to help them calm down. 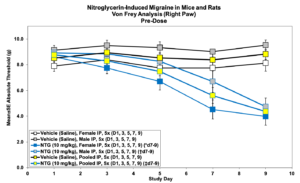 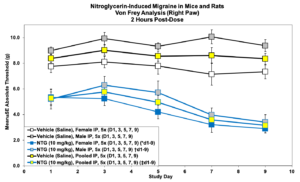 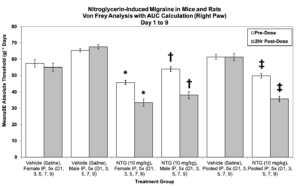 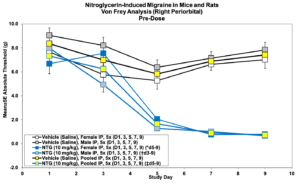 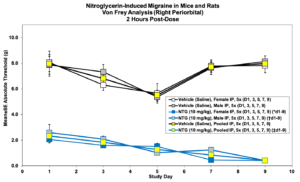 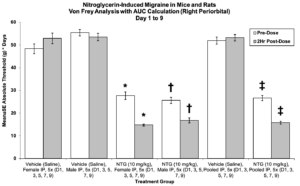