The NZBWF1 model of spontaneous systemic lupus erythematosus (SLE) is the oldest and most commonly used of the classical models of SLE1.

Systemic autoimmunity, hemolytic anemia, proteinuria, and immune complex glomerulonephritis start at 5 to 6 months of age (approx. 23 weeks of age). Disease is more pronounced in females due in part to estrogen levels. Female NZBWF1 mice die at an average of 35 weeks of age  and males at 58 weeks1, 4.

Animals are observed daily for significant clinical signs, moribundity and mortality. Body weights are recorded weekly, at scheduled termination points, and as needed if test subjects appear to decrease in weight by visual inspection. Plasma samples for Anti-dsDNA ELISA and urine samples for proteinuria measurement are collected at scheduled time points. Urine protein is measured using Clinitek Multistix test strips (Seimens) and then scored (see Scoring Key below). At necropsy, spleens and kidneys (paired) are collected and weighed.

Kidneys from all surviving animals are examined microscopically by a board certified veterinary pathologist  (Dr. Alison Bendele) according to these Methods. 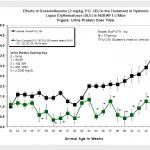 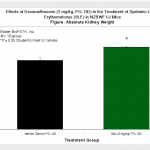 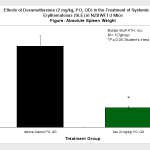 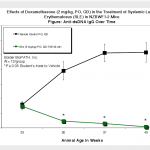 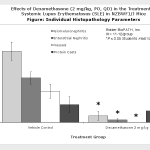 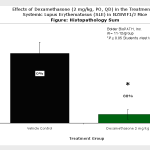 A cross between New Zealand Black and New Zealand White (NZB/W) mice, the F1 hybrid strain develops severe lupus-like phenotypes that resemble human SLE. As in humans, multiple genes contribute to the pathogenesis of SLE; in NZBWF1 mice, these genes include major histocompatibility complex (MHC) as well as several non-MHC genes2. Similarly to human SLE, the disease in NZBWF1 mice has a strong bias in favor of females, which also suggests a pathogenic role of estrogen1. Clinical manifestations of SLE in this model include hyperactive B and T cells, high titers of several autoantibodies directed against nuclear antigens, defective clearance of immune complexes, and fatal immune glomerulonephritis2. Unlike in human SLE, NZBWF1 mice are not thought to develop antibodies against the nuclear components Smith (Sm) and ribonucleoprotein (RNP) although some research suggests that an autoimmune response to Sm/RNP antigens does occur in NZBWF1 mice3. The NZBWF1 model can be used to study the genetic basis for this complex multifactorial disease and to study phenotypes in a gender-biased context similar to that seen in humans. Because the model has been in use since the early 1960s4, it is well characterized with much comparative data available.